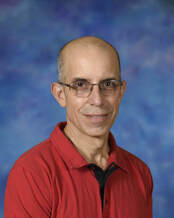 Mr. Paul Rau- Music Teacher
​
Mr. Rau began playing music at age six.  In High School he was involved with orchestra, choir, swing choir, and theater, and began playing keyboards in various bands.  He majored in jazz studies at De Paul University, and continued playing in bands professionally in the Chicago area. Mr. Rau began playing the organ in church at the age of 12, and became choir director at the age of 18.  He became the full time Music Director at St. Odilo in 1998, and began teaching music at the school in 1999. He also continues playing professionally in various bands in Chicago and throughout the Midwest. He is married and the father of four children who attend St. Odilo School.

Music Curriculum
- All styles of music are listened to and discussed, from the Medieval Period to modern styles. Religious songs are a major part of what we sing.
- Each music class, regardless of grade level, begins with 2-3 minutes of quiet listening.
- Early grades concentrate more on singing, listening, and movement, along with basic discussions of musical concepts such as pitch, volume, counting, and identification of instruments and musical patterns.
- Middle grade students begin to learn about music history and more advanced concepts such as arranging, lyric writing, and the evolution of musical styles. Music is used as a vehicle to talk about other subjects such as geography, morality, math, science, etc. As we sing songs from books and music sheets, students are practicing looking up page numbers and reading lyrics. This is an opportunity to learn new vocabulary as well as sing in other languages such as Spanish and Latin.
- Older grades concentrate more on listening and discussion of music history and the origins of modern styles. They will learn about recording techniques and technology, video and concert production, and do more in depth analysis of various songs and compositions. 7th and 8th graders will attend an opera one year and a symphony concert the next year.

- All students are capable of getting at least a B in music. There is no homework, there are very few tests or quizzes, and just a few in-class writing assignments.


Why is Music Important? Music in our lives is like a holiday feast. At the most important parts of our lives it is always there. It is at our birthdays, it is at our worship, it is at our graduation, at our wedding, and at our funeral. What is a party without music?

This is why a young musician practices scales in solitude while other children are playing outside. This is why the singer drinks tea and goes to bed early while their friends stay out late. This is why children are taught to sing and clap and learn about great composers of centuries past.

For when the important times of our lives arrive, who will sing “America the Beautiful?” Who will sing “Happy Birthday?” Who will lead the congregation in “Joy to the World?” Who will play “La Bamba” at the wedding celebration? Who will play “Taps” at the cemetery? Who will move an audience to tears with the glorious finale of Beethoven's 9th Symphony?
​
So children must practice even when they don't want to. Parents must encourage their children to not give up on their lessons and must gently insist on practice when it would be easier to give in to the protests. Schools must know that music is not an extra that can be taken away when times get tough. The community must know that music is no less important than reading writing or arithmetic, and it is probably more integral to our spirit than any of them.
A song isn't born- it is created from an inspired soul. The violin doesn't play itself, someone must play it with love and emotion. Who will write the songs? Who will play the music? Who will sing their children to sleep? Will it be you?
©2020  St. Odilo Catholic Church
Site powered by The Archdiocese of Chicago